V&A Dundee has been shortlisted for a prestigious award.

The museum is one of five finalists for the Art Fund Museum of the Year 2019.

The award celebrates innovation and achievement in museums and galleries across the UK, with the winner receiving £100,000.

The other finalists are HMS Caroline in Belfast; Nottingham Contemporary, Pitt Rivers Museum in Oxford and St Fagans National Museum of History, near Cardiff.

The winner will be announced at a ceremony at the Science Museum in London on 3 July.

As Scotland’s first design museum, it has permanent Scottish design galleries and holds major exhibitions showcasing the best in international design, as well as events, talks and workshops. 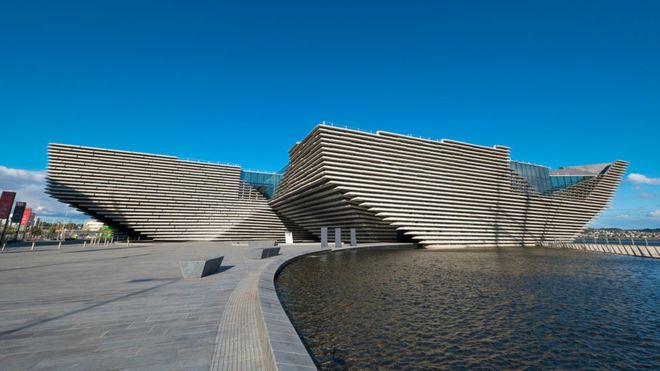 Philip Long, director of V&A Dundee, said: “It is an honour for everyone who has helped create, launch and run V&A Dundee for the museum to be shortlisted for Art Fund Museum of the Year 2019.

“This award recognises achievements in 2018, a year when we reached the milestone of engaging over 100,000 people some six months before opening the museum, travelled across Scotland to work with young people, and then launched the museum with a thrilling family festival of design and music.

“Since opening we have already welcomed over 500,000 visitors, double our pre-opening estimates, as well as attracting many people to visit other visitor attractions in Dundee and spend time in this beautiful area of Scotland.”

Speaking on behalf of the judges, Stephen Deuchar said: “The five shortlisted museums have each offered outstanding and different approaches to the vital task of engaging with the widest public in new and adventurous ways.

“We congratulate all those who are on the shortlist and encourage everyone to go and visit them.”

“V&A Dundee has been a game-changer for Scottish tourism, propelling the east of Scotland into the global spotlight and showcasing our cultural offering to a worldwide audience,” he added.

Scroll back to top